So the first question that we should be answering is what are variables and what are their purposes. React Variables store data in the terms of values. They might or might not modify in relation to the current context. Variables adapt various data types that are available. Also, it depends on the programming language too that we use or the scripting language. In this article, we will learn to declare variables and work. It might include the keyword: this or static, props, or even state variables.

Using the Keyword: This

It highly depends on the situation what the scope of the variable might be. The “this” keyword typically refers to a Javascript element. It obviously depends on the different scopes or context used. If we take an example such that if we console the keyword “this” globally then what we will be able to get is an empty object. But if we rather want to use the inbuilt JavaScript functionalities or even things such as browser-based functionalities, then the window for objects can be used. The same thing is applicable to the function that uses the global scope.

Example of using “this” keyword with

In the React classes for components, methods may refer to the class attributes like the props and state. It is absolutely easy to define these methods into the state of the current context. However, if we consider the methods for the components we need to access this.state and also this.props. We just need to bind the React components for the context of “this” while using these methods.

Let’s take an example. The component has only one method that onFormSubmit(). But we have to remember the constructor of the class. This method uses “this”in the current context. When we bind the keyword to the class method, it enables us to access the props and state component easily with two things such as this.props and this.states. So when we are trying to access any of the props after the binding, we use the props value as we can see clearly in the example that e have considered below:

Use of static as the react variables type:

It is possible to use static variables in React classes just like different kinds of variables that can be accessed with it. But we are able to modify the scope of variables. In the case of the static variables, modification is not possible. It is extremely easy to declare and use the value which is static or fixed. Consider the following example that we have here: 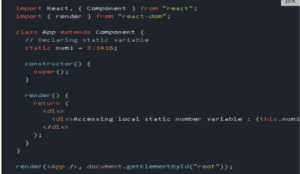 Here, in this example, we see that there is one static variable that we have called num1 and the value of num1 is fixed. It means that no one can really change its value into the current component but we can use it for the purpose of rendering. In a similar manner, the state object can be maneuvered as a static value. This means that the state object is going to be static and this also means that we can easily pass it to the next child component and this will be acting as a value that is constant.

Making Use of State Variable:

One of the widely used words that we find in React is State. The state manages the data transmission that is based on components. Here, we can declare the key-value pair and modify it solely based on the requirements of the function. As we already know, the state can be declared into the constructor as an object that is static. It is possible to access the state variable with this.state. Also, it is bound to the present context by use of the keyword “this”.

Where to declare variables in react?

Suppose you are trying to declare a variable in the class of React Js and you want this variable to be accessible for various functions. Suppose this is your code:

onMove doesn’t define the value of this.testVariable. However, it is possible to put the value on the state. But the problem with this is that each time the values change, the render() method needs to be called. Although this is absolutely unnecessary.

Using EcmaScript6 syntax in React binds this to the lifecycle methods of the component and does not bind this to user-defined functions. So, the function that we have declared above will not have the same context as that of the class due to which trying to access this would not give you the results that you are expecting.

Method 1 to bind the context: 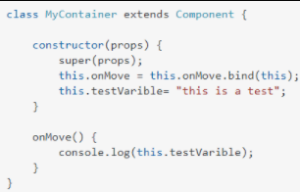 Method 2 to bind the context:

Usually developers prefer it but there’s no compulsion. There is also one another method to construct a class without using a constructor.

However, if we want to update our view as well then we should try using setState and state methods. Refer to the example below for a clear view: 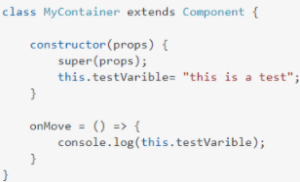 We can define the variables in JavaScript with var, let, or const. There are some general rules that you should always keep in mind:

In this article, we understood what variables exactly are and how to declare those. We can now also use react variables like local, global, static or state, and props that are required as a variable. If you are a developer, you can adopt various options for the purpose of storing the data for rendering into any react component that you want.

To sum it up, we have also learned briefly about the difference between var, let, and const. It is also important to know how to define, name, and assign a variable. A constant reference can never change. But not to forget that the values of the object that are referred to by that particular constant may change. Another important thing to know while studying about React variables is the pass by reference and pass by value and the reassignment of a variable to some other type.

Fundamentally, we believe it is the single most critical benefit in a rapidly evolving digital environment. Since it allows us to swiftly...
Read more

What is the guideline to React JS Learning? There are several clear talents you must master if you want to make a career change...
Read more

What is the guideline to React JS Learning? There are several clear talents you must master if you want to make a career change...
Read more
React native